Sweating it Out: Is There Really Any Benefit? 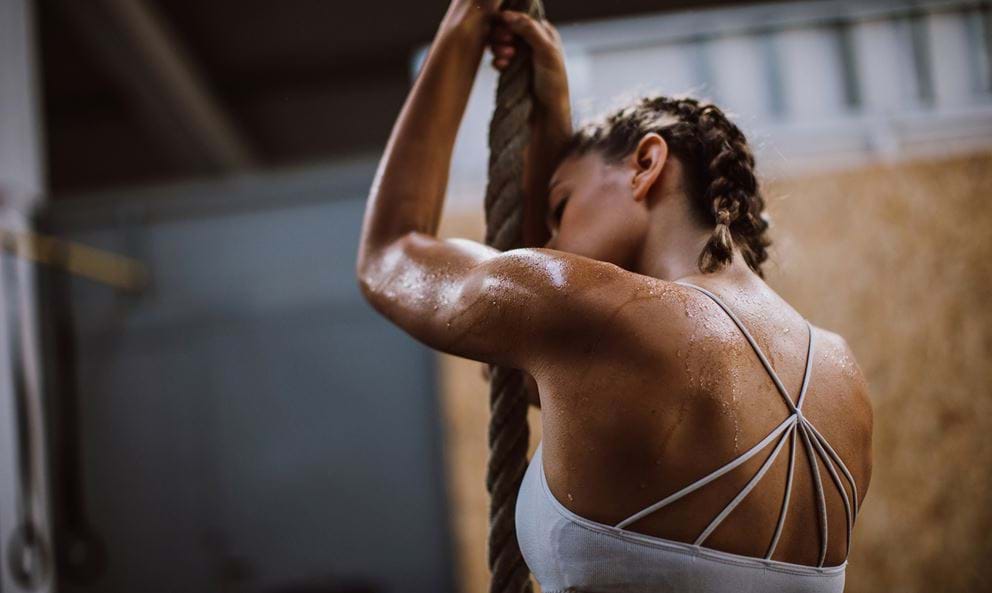 Remember that iconic scene in Rocky where Stallone runs up a bunch of stairs wearing a warm looking hoody, tracksuit bottoms, gloves and hat?

In the film, the outfit makes sense (it was a pretty chilly looking day, to be fair) but you might have noticed that some people in the real world seem to be enthusiastic about dressing as if they were about to climb Everest, every time they do a workout.

There’s a well-established theory that says the more you sweat, the more calories you burn, and the better a workout you have.

But is there really any benefit to wearing a bin bag on a hot summer’s day in order to “sweat it out”? Let’s take a look.

Sweating it out helps you lose… water

A big part of the reason why people believe that sweating more means a better workout, is because of the simple fact that they weigh themselves after those really sweaty workouts, and often find they’ve dropped a seemingly incredible amount of weight.

And that’s not imaginary, either. You really will lose weight after sweating a lot. Water weight, that is.

Fat loss takes time, and even the most intense workout session won’t have any immediately noticeable impact here. Rather, the fat loss you do experience will happen over a prolonged period of time, as a result of the elevated metabolic rate you may enjoy from certain forms of exercise, as well as operating in a caloric deficit.

Each training session contributes to fat loss, but it’s just fuel for the fire.

Water loss, on the other hand, can happen rapidly, and with dramatic consequences for the scale.

It’s worth keeping in mind that if you’re not rehydrating properly during exercise, your health and athletic performance can suffer dramatically. Finishing a workout and weighing significantly less than before is, therefore, not a great sign.

The hotter it is, the more trouble your body may have burning calories

There’s an interesting idea out there known as the Heat Dissipation Limit (HDL) theory. It argues that all warm-blooded creatures, including humans, may have their total energy expenditure “capped” by the body’s ability to get rid of heat.

Think of it as something like “an engine can only work so hard, and get so hot, before it melts down. To work harder, it needs more cooling”.

Obviously, this implies that making yourself as hot as possible during exercise may stop you from burning off the maximum number of calories.

A 1999 study published in Aviation, Space, and Environmental Medicine examined the effects of cold on the metabolic rate of humans.

The study found that the male test subjects had a higher metabolic rate, as well as higher carbohydrate and fat oxidation, when in a cold environment (5 degrees Celsius) versus a hot one (29 degrees Celsius).

In other words, cold appeared to cause the subject’s bodies to burn more calories and shed more fat.

There seems to be some good evidence that cold causes people to burn more calories and lose more fat. But then there’s also evidence that heat does the same.

A 2002 study published “Medicine and Science in Sports and Exercise” studied the effect of temperature over 90-minute cycling workouts conducted by nine men. It was the men working in the highest temperatures that recorded the largest fat burn.

So, as for whether sweating your way through your workout will return better results, the jury’s out.

Overheated training is a lot less fun, meaning your motivation will be a lot lower

This may not be the most scientific point in this article, but when all is said and done, forcing yourself to do overheated training is a deeply unpleasant experience.

As a major part of getting and staying fit is maintaining your enthusiasm, and keeping up the consistency of your workouts, anything which makes you dread training has a high likelihood of ruining your motivation and causing you to falter in your routine.

As you could guess, that’s no good.

The evidence suggests that those claims sweating out your workout will produce better results is debatable at best. But one thing’s for sure, feeling uncomfortable during your workout will only demotivate you and make you more likely to quit quicker.

All that we can prove over-dressed workouts really do is to dehydrate you and make you lose a lot of water weight. And that isn’t a good thing.