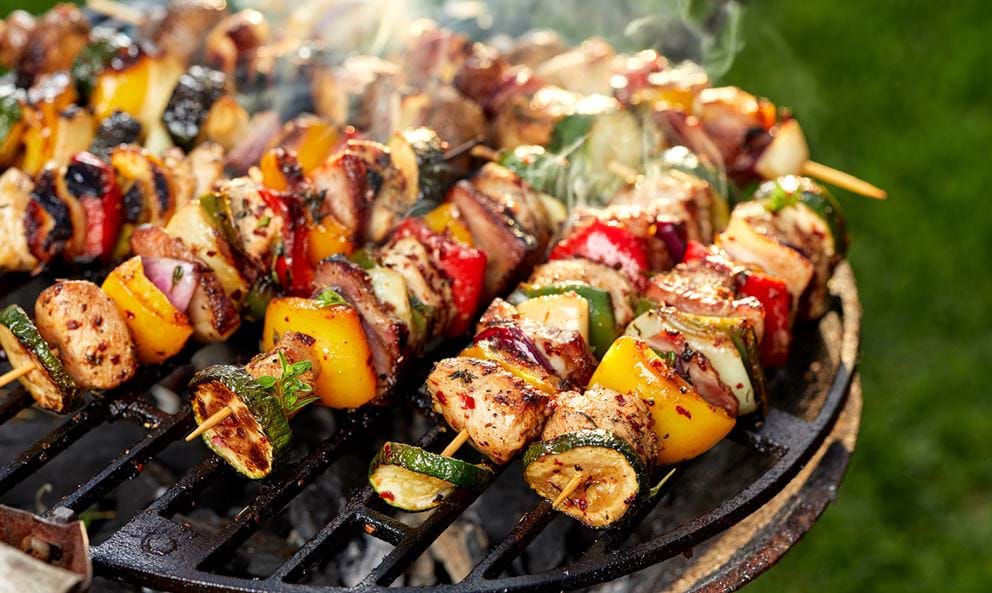 Can you hear the birdsong and the gentle hum of bees? Smell the faint scent of sunscreen and freshly cut grass? How about the aroma of grilled meat and charcoal wafting on the breeze? With the weather set to hit its annual peak, the time has almost come to crawl out of your gym sanctuaries, stumble into the sunlight, and get barbecuing.

With a complement of great food, great company, and mild sunburn, what could be better? There’s just that pesky little issue that barbecued food isn’t really known for being healthy, low-calorie, or dieter-friendly in any other way.

Here are six food swaps to help make your next barbecue a bit lighter and kinder on your waistline.

Grilled lamb chops instead of baby back ribs

Baby back ribs — coated with copious amounts of salt — are one of the classic barbecue treats of the ages. Unfortunately, they’re not likely to be the kindest on your waistline.

A mere 85-gram serving of baby back ribs might contain as many as 248 calories. Grilled lamb chops, by contrast, offer just as much rich flavour, but with a slightly lower calorie content and an improved protein-to-fat ratio.

Bratwurst instead of hot dog

Of course, hot dogs are also liable to be filled with suspect ingredients and additives, many of which might have negative health effects. What’s more, hot dogs are typically made using low quality and heavily-processed off-cuts of meat.

Instead of barbecuing the standard plasticky-looking hotdogs, make the switch for more substantial meaty sausages such as the German bratwurst or South African boerewors, which are likely to contain higher-quality ingredients and more protein.

Grass-fed steak instead of standard steak

Steak is a fantastic primal food that can awaken anyone’s inner caveman in seconds. But not all steaks are created equal.

At your next barbecue, instead of throwing a standard steak on the grill, why not pay a bit extra for a grass-fed beef steak instead?

Grass-fed beef has been found to have a healthier fat profile than grain fed beef, along with potentially higher levels of cancer-fighting antioxidants and essential nutrients.

Vegetable skewers instead of meat skewers

This one is hardly much of a stretch, since most skewers already include at least a couple of slices of pepper between the generous chunks of meat and cheese.

So why not go one step further and create a whole veggie skewer? Vegetables such as courgette and pepper take on a delicious smoky quality when grilled over a fire, while others such as sweet potato, parsnip, and carrot can add a more filling “meaty” quality to the meal.

Whether you or one of your guests is a vegetarian, or you simply want to go a little lighter, vegetable skewers could be a surprise hit at your next barbecue.

Burgers are a combination created by the gods; easy to hold, easy to add toppings to, and combining flavours in a way that can seem too good to be true.

Of course, the actual “meat” part of the hamburger isn’t obligatory by any means. Try grilling a large portobello mushroom on your barbecue, and seasoning it with ingredients like garlic butter. Next, transfer the mushroom over to your burger bun and add your preferred garnishes and extras.

You’ll be amazed at how meaty and delicious the burger tastes, all while being substantially lower in calories than the conventional type.

Corn on the cob with olive oil instead of butter topping

Grilled corn on the cob is an excellent and timeless, nearly-guilt-free barbecue treat. That is, until it’s drenched in oceans of melted butter.

While there’s nothing wrong a bit of butter on your corn, too much of it will likely push your saturated fat intake beyond what you may be comfortable with.

Coating your corn with olive oil as an alternative has various benefits aside from a more Mediterranean flavour. Among other things, it’s been suggested that olive oil has anti-inflammatory properties comparable to Ibuprofen. Olive oil has also been found to help lower blood pressure.