Rise Above the Noise 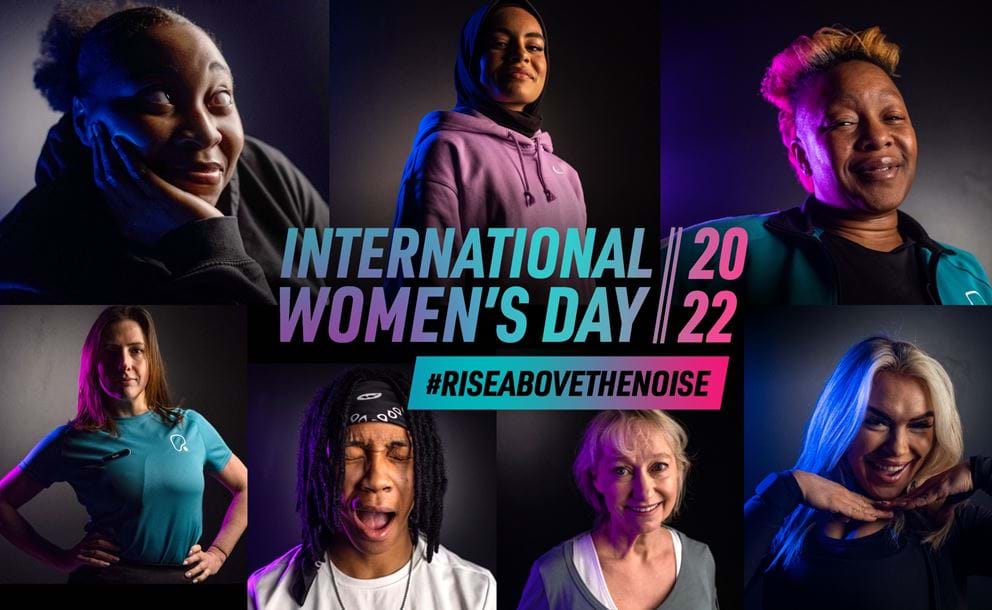 Women have been told many things. That we can’t be as strong. That we throw like a girl. That we’ll look too manly if we lift. Or that we need to stick to the pink weights.

All this noise creates barriers and intimidation for women, especially in the fitness space. Making it easy for women to feel like they shouldn’t or can’t achieve certain things.

If you identify as a woman, this day is for you. This International Women’s Day, we’re championing women everywhere that Rise Above the Noise of gender bias every day. We want to encourage women to block out the noise and instead be unapologetically themselves.

The incredible women featured in our film are either PureGym members or part of the PureGym team. We asked them to share their experiences of gender bias and how they Rise Above the Noise.

We hope reading their stories will help women everywhere to feel empowered to block out the external noise and voices saying, “you can’t do that because you’re a woman”, and instead feel inspired to make it happen anyway.

Having worked in gyms since 2000, it’s not been unusual for me to experience gender bias over the years in such a male-dominated industry.

As women, we’re often told that we can’t have a successful career and have children. That it’s an either-or situation.

I chose to ignore that and rise above the noise telling me otherwise. I applied and was promoted to become a Cluster Manager, 7-months into my 9-month maternity leave.

I showed that it was possible. I showed that you could have time off, care for a baby and still step up in your career.

Lots of business wouldn’t promote someone on maternity leave, but PureGym believed in me and supported me in my career.

Don’t get me wrong, the noise from society is still there. But I work hard and continue to believe in my ability to prove anyone wrong who thinks “because you’re a woman” is a reason for not striving for your goals.

Today, like many women, I still face gender biases. But I know that the only person who can hold me back from being successful – is ME!

So, to any other women who have lost confidence in themselves while taking time out to have a child, I encourage you to rise above the noise. Drown out any negativity - whether it’s in your own head or from other people. And remember that our experiences as mothers only serve to make us stronger, wiser and (most certainly) more patient.

I once was approached by a male gym member on the lat pull-down machine, patronisingly offering to raise the bar down as I stood on the seat to reach the bar which, to him, was amusing.

Another instance involved a male gym member supposedly seeing me ‘struggle’ to lift an empty barbell, who then started to dictate which weight plate I should use.

Did I need assistance in both situations? Not at all, I was perfectly capable of doing it myself.

As a passionate female powerlifter, jump rope enthusiast and soon-to-be personal trainer, it is frustrating to find myself and others in situations like these.

It is still uncommon to find Bengali Muslims (like myself) in the free weights area in every gym across the UK. Some have the misconception that they will look ‘manly’, whilst others are simply intimidated by the staring eyes or the thought of performing the incorrect technique.

I thought to myself… enough is enough. So now I try to rise above the noise and block out all the white noise, misogynistic and judgemental comments that surround me.

I try to inspire other women to believe in themselves and not let the fear of judgment stop them from focusing on their health and mental wellbeing.

To all the women who feel overwhelmed by the noise: remember, you are your own competition and need not worry about anyone else.

Ladies, what can I say? When it comes to anything that we want to do in life, it’s often followed by fear. We fear the challenge. We fear not being fit enough. Ultimately, we fear failure.

We see other people doing it, and we think about giving it a shot – but when it comes down to it, there’s always something holding us back. Telling us that we can’t. Whispering in our ear that we’ll never amount to anything. That we’ll never break those bad habits.

Whether it’s societies pressures or your own internal belief, when you’re told something enough, you start to believe it.

This noise is the fear, it’s the distraction. It’s the thing that we need to silence.

One day I decided I wasn’t going to listen to the noise anymore. I took charge of my own life, started working with my personal trainer and since then I have lost 4 stone and can see huge improvements in my health.

I feel lighter and happier within myself. I’m kicking down doors that were standing in my way and ignoring the noise telling me I’m not good enough.

If I could give one piece of advice to other women struggling - be the change you want to see. Take action and rise above the noise.

When I first started exercising, my goal was to go to the gym in order to build confidence in myself. I quickly found that not all gyms are as welcoming to people like myself. I was often criticized and patronized for training with weights to gain muscle mass, being told things like ‘No, you’re getting too big, you’re going to lose your femininity’.

Statements like that not only suggest that women shouldn’t train in a certain way as they may become less ‘feminine’, but it also completely disregards any other expression or identity under being a woman.

As a black, masculine presenting, queer woman, I have faced being stared at, spoken about and often confronted about my clothes, my body and even how I walk, just for wanting to go to the gym to feel better about myself like everyone else and for being myself.

People like me, queer women, trans women have been rising above the noise for centuries and though we continuously face challenges we will continue to rise, because we’re strong, unbreakable, and simply amazing. We’re here.

Before I started going to PureGym, I hadn’t stepped foot in a gym for 30 years! I was very apprehensive, and to be honest, had to be strenuously cajoled by my sons, and gently encouraged by my wonderful friend Moya. I didn’t think it was possible that I could get there at my age, to do anything but sit like a lump at the back of the class – let alone ENJOY it!!

It seems sometimes that in society there isn’t enough belief in women, and that we, as women, don’t have enough belief in ourselves. Well, that seems to get even more true as we get older, but it doesn’t need to be so.

Going to the gym not only improved my physical health – my mobility, strength, fitness, and flexibility – but also my mental health. But most importantly, having achieved so many positive changes, helped me to believe in myself more. I am SO happy I did it!!

I hope my story might be encouraging to other women, who might feel daunted - to rise above the noise and just try it. Believe in yourself.

As a woman, I’ve been in the fitness world pretty much all my life. Going from a young athlete constantly in a competitive environment being told “women shouldn’t be competitive” to being in the fitness industry, which is still a very male-dominated space.

I’ve found being a woman has come with its challenges, but they have also presented me with opportunities for growth.

“Because you're a woman” has been a bias that I've faced at various points in my life. From career choice to hobbies to behaviours. But it's one that I've not let hold me back or scare me off from anything I choose to do in my life and career. If anything, I'm grateful for it as it's developed my resilience, me as a person and my 'watch me' mentality.

The topic of female strength has been a huge one for me. I’ve been told countless times “You look too strong” or “Women shouldn't lift like that”. The scary thing is that when you hear something so much, you start to question if it’s actually right. Should I be doing this as a woman?

But the answer is yes. Your voice is important. You are powerful. And truly, you can do anything you set your mind to. So go out there, rise above the noise and do it YOUR way. Don’t let “because you’re a woman” hold you back. Let it be your advantage; make it your superpower.

I like to lift heavy and the disbelief on men’s faces (more in the past) when you are deadlifting 100kg plus can be intimidating and reduce your confidence. Their eyes say, “you’re not going to be able to lift that” and when you do, they are shocked!

It generally took me a long time to venture into free weights and it wasn’t until I became a personal trainer that I felt I had a right to be there. But over the years I’ve realised that women have every right to use all parts of the gym and to feel good about it too.

Now, I’m experiencing perimenopause – which makes me feel lethargic, weaker, and less able to lift the weight that I’m used to. It’s something that’s not spoken about a lot, and as a woman, we’re made to feel like we shouldn’t speak up about menopause and we should just sit back and endure the symptoms.

But I want to rise above the noise and help change that. It’s something, unfortunately, that many of us will experience, and we shouldn’t have to feel like we must carry that weight alone.

I don’t always feel myself, and that same lack of confidence I used to feel creeps back and sometimes my training session ends prematurely. In a way, I am having to retrain my body to do what it can now, instead of beating myself up because I can’t train like I used to. It’s all a learning curve!

But I adapt and I adjust my mindset. I change my training to work with where my body is taking me. I’m kind to myself and I’m kind to my body, and I encourage you to do the same.

Join us on International Women’s Day in a small, friendly, group setting, and the team will show you how to lift weights confidently while supporting you with the basics of good technique. We hope this will help to inspire your workouts and achieve the best results!

We’re looking forward to seeing you at the bar! Please check your individual gym timetable to book onto a session.